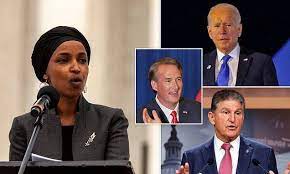 Ilhan Omar retweeted a comment by Twitter user Secular Talk that said: 'Can't wait for the left to be blamed for a not at all left democrat losing a D+10 state.' She added a face-smacking emoji

Why Are So Many House Democrats Leaving Congress?