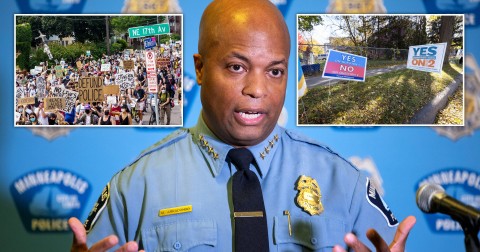 The proposed change would have fought crime with "a comprehensive public health approach to the delivery of functions by the Department of Public Safety," the specifics of which would have been in the hands of the mayor and City Council.

According to supporters, the plan would have amended the city's charter to remove a requirement that the Minneapolis PD maintain a minimum number of officers, whose role would be reduced in matters of the homeless, mental health issues, and substance abuse - however they would have still been the first line of defense when it comes to violent crime.

Or they would have all been fired - since the proposal was fatally vague.

Supporters of the measure, including the 'Yes 4 Minneapolis' coalition which petitioned to put the item on the ballot, blame 'misinformation' for its defeat.

"If the people of Minneapolis vote no, that does mean that the disinformation campaign has won out for this battle. And it means that this fight continues," said JaNaé Bates, a minister and spokesperson for the group. "We will most certainly continue moving forward."