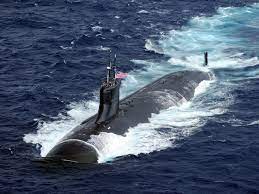 "When elephants fight, it is the grass that gets trampled."

So warned Philippines President Rodrigo Duterte in his address to the UN General Assembly on September 22, 2020. He was referring to the consequences for East Asia of a conflict between the US and China.

Fast forward to October 2, 2021, about one year later, and the first patch of grass has been stomped on by the U.S. elephant, trudging stealthily about, far from home in the South China Sea. On that day the nuclear-powered attack submarine, the USS Connecticut, suffered serious damage in an undersea incident which the U.S. Navy ascribed to a collision with an undersea object.

After sustaining damage, the submarine apparently surfaced close to the Paracel Islands which lie only 150 nautical miles from China's Yulin submarine base in Hainan Province. The Connecticut is one of only three Seawolf class of submarines, which are assumed to be on spying missions. But they can be equipped with Intermediate Range (1250-2500 km) Tomahawk cruise missiles which can be armed with nuclear warheads. It is claimed that they are not so equipped at present because the Navy's "policy decisions" have "phased out" their nuclear role, according to the hawkish Center For Strategic and International Studies.