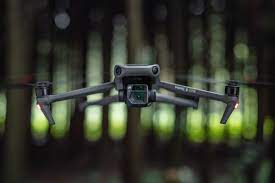 One of the most anticipated drone releases is finally out. Actually, it's two drones. Today, DJI has released the Mavic 3 and Mavic 3 Cine.

There are a few big headline features shared between both of the new drones, but let's start with the one reserved for the $4,999 Mavic 3 Cine. The Cine model is capable of filming Apple ProRes 422 HQ footage at 5.1K up to 50FPS, and it has a built-in, but not user-replaceable, 1TB SSD.

The cheaper $2,199 Mavic 3 doesn't come with ProRes or a built-in SSD but shares the same dual-camera system powered by a 4/3 CMOS sensor. Both drones are capable of filming in 4K at up to 120fps and capturing 20MP photos. In addition to the main 24mm lens, there is also a hybrid zoom lens capable of 28x digital zoom. In focal length terms, that equates to 162mm at f/4.4.Both drones have batteries rated for 46 minutes of flight time, which is a significant upgrade over the Mavic 2's 31-minute battery and even the Mavic Air 2s & 2S, which could fly for 34 and 31 minutes on one charge, respectively.

'My husband's opinions are not my own':