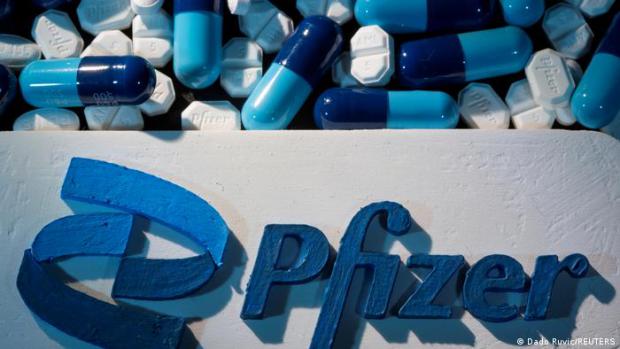 The news sent Pfizer's stock surging, while Moderna and Merck shares tumbled, during premarket trade. Pfizer shares were trading up 11%+:

The key takeaway from the Pfizer announcement is this: Pfizer said studies showed its COVID-19 pill reduced hospitalizations and deaths in high-risk patients by 89%. That's even higher than the 50% reduction in hospitalizations and deaths shown by the Merck pill. Again, like Merck, Pfizer said that it was no longer taking new patients in a clinical trial of the treatment "due to the overwhelming efficacy" of the drug, which it now plans to submit its findings to the FDA for emergency authorization (just like Merck is doing). Yesterday, Merck won approval for its new COVID antiviral, molnupiravir, from regulators in the UK, and it's pushing to wrack up as many EUAs as possible from regulators from all over.

Pfizer is already planning to seek approval emergency approval from the US government because, according to the numbers, its drug is even more effective than molnuiravir. According to the headline numbers, Pfizer's new antiviral is even more effective than the rival pill from Merck. Pfizer's pill, which will be sold under the brand name Paxlovid, cut the risk of hospitalization or death by 89% when taken within three days after symptoms emerge (the number for Merck's drug was it needed to be taken within 5 days of infection).