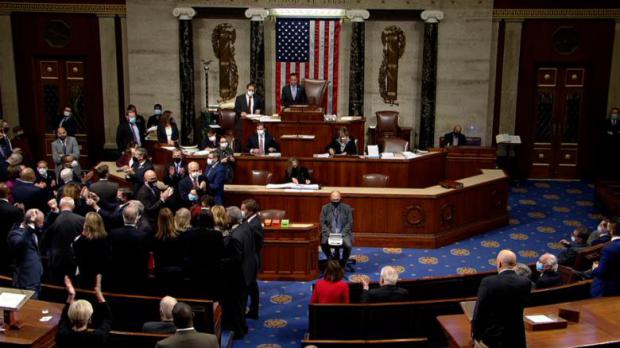 The House of Representatives passed President Joe Biden's $1.2 trillion infrastructure bill on Friday, putting an end to a months-long deadlock caused by wrangling between the progressive and fiscally conservative wings of the Democratic Party over just how big the president's accompanying social and climate spending package will be.

Georgia congresswoman Marjorie Taylor Greene drew up a list of the black sheep Republicans, accusing them of "hand[ing] over their voting cards to [Democratic House Speaker] Nancy Pelosi to pass Joe Biden's Communist takeover of America via so-called infrastructure."

Greene did not specify which part of the $1.2 trillion infrastructure bill, which includes funds for repairs of America's roads, bridges, utility networks, airports, railroad and public transport infrastructure, half a million new electric vehicle charges, and light-rail, bicycle and pedestrian infrastructure in major cities, would result in a "Communist takeover".

Never Trump Republican Adam Kinzinger, one of the congressmen who voted in favour of the bill, shot back, suggesting that equating infrastructure to communism was "a new one" and mocking Greene by suggesting that former Republican President Dwight Eisenhower's "interstate system should be torn up or else the commies will be able to conveniently drive!"