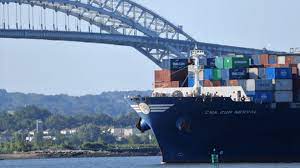 This number brings the total throughput for 2021 through September to 6,659,082TEU with more than 3.69 million lifts.

"For the first time in more than 13 months, cargo volume at the Port of New York and New Jersey rose at a slower pace in September," noted the port authority in a statement, while the US port had been experiencing more than a year of unprecedented double-digit monthly growth in cargo activity.

However, while the number of vessel calls in the month of September was consistent with previous months, there was a notable decrease in vessels with a capacity of 9,000TEU or more that called the port that month.

Imports at the Port of New York and New Jersey reached 379,190TEU in September, reflecting a 1.2% increase over the same month of 2020, while exports declined by almost 13% year-on-year, totalling 99,893TEU.