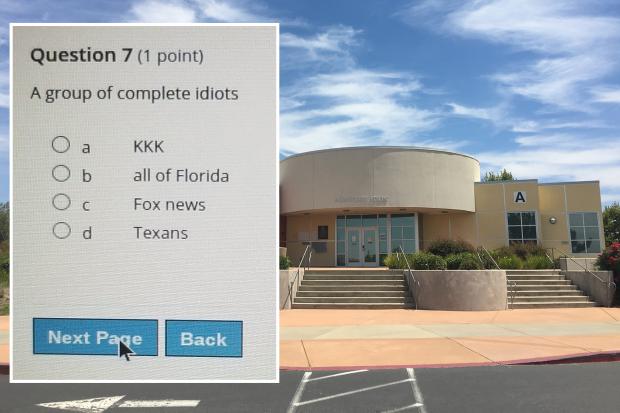 The unidentified teacher at Whitney High School in Rocklin quickly came under attack after a parent shared a screenshot of the test question to social media.

'We all have different beliefs,' Jessa Krissovich told Fox 40. 'This is the United States and we all come from different backgrounds and everybody should be okay with who they are.'

'These stories have gone in one ear and out the other. It sounded unbelievable.'

'While personnel matters will remain confidential, appropriate disciplinary steps will be taken,' wrote Cutts, whose school is located about 25 miles northeast of Sacramento.

Another parent, who asked to remain anonymous, told Fox 40 that one-sided political comments, mostly against the Republican Party, are a common occurrence with this social science teacher.

'The question on the test is really blatant obviously and that's out there,' the parent said. 'This has been the first time it has been looked at of him crossing the line.'

Joel Alquicira, a former student of the teacher who administered the test, told KCRA: 'I understand he's just trying to make a joke, but that kind of stuff shouldn't be on a test.'