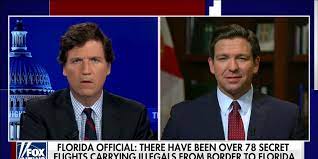 The Republican governor of Florida, Ron DeSantis, is planning to block Democrat Joe Biden's administration from flying illegal aliens into his state following a brutal murder.

Gov. DeSantis said he is working with the state legislature to figure out what they can do to end the practice.

DeSantis's comments came in response to news reports this week that an illegal alien allegedly murdered a father of four in Florida.

The migrant in his mid-twenties, Yery Noel Medina Ulloa, posed as an unaccompanied minor at the border and was let into the U.S. under Biden's soft policies.

"There was an individual who had posed as a 17-year-old, actually was in the mid-20s, brought here, had been here, ended up committing a murder," DeSantis said.

"And so now this individual has been detained, should have never been in this country to begin with, and definitely should not have been dumped in the state of Florida."

"And so these are middle the night flights, no, no notification to the state or anybody," he added.

"And this is not the way you keep people safe.

"It's reckless, and it's wrong.