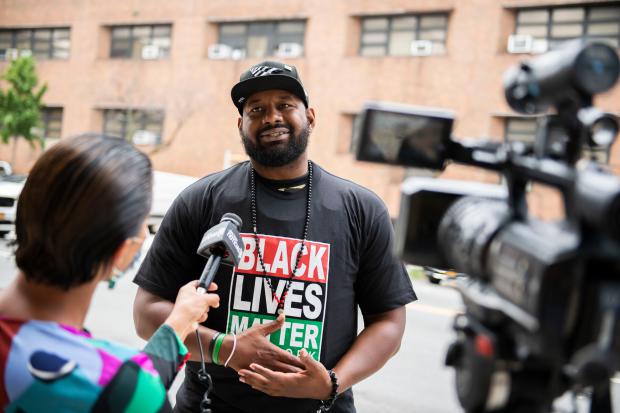 New York BLM co-founder Hawk Newsome debated the plan for a return to tougher policing with Adams during a contentious sit-down at Brooklyn Borough Hall Wednesday that was livestreamed on Instagram.

Although Adams found common ground with the activists on plans to fight poverty in the black community, the former NYPD captain said he'll be reinstating a revamped version of the undercover anti-crime unit that was disbanded at the height of widespread police protests last year.

"If they think they are going back to the old ways of policing then we're going to take to the streets again," New York BLM co-founder Hawk Newsome said outside Borough Hall after the meeting.

"To ignore that history and say you're bringing it back means that he's tone deaf," Newsome told The Post over the phone about the task force whose officers were involved in the deaths of Amadou Diallo, Sean Bell and Eric Garner.

Adams, throughout his campaign, promised to bring back a "reinvented" version of the Anti-Crime Unit that was tasked with firearm busts, as well as a crackdown on violent crime and hard drugs.

The controversial unit was dissolved in June 2020 by Police Commissioner Dermot Shea following a "disproportionate" number of high-profile incidents that involved the plainclothes cops.

Former officer Daniel Pantaleo was assigned to the anti-crime unit when he placed Eric Garner into a chokehold on Staten Island — with the man's last words, "I can't breathe" becoming a rallying cry for the BLM movement.

The BLM leader said he was troubled Adams "didn't offer a comment on police reform … he wouldn't offer us anything concrete" during their sit-down.