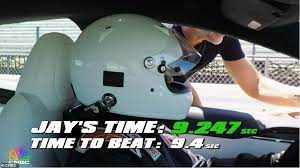 The celebrity clocked in at 9.247 seconds, beating out the 9.4 second record

Tesla touted the record through the car's triple-motor engine

Jay Leno made history when he broke the Bugatti Chiron Sport's car quarter-mile speed record with a Tesla Model S Plaid, which has quickest acceleration of any car ever built.

On the latest episode of Jay Leno's Garage, teased by MSNBC on Wednesday, the car-obsessed comedian hopped into the $129,000 Tesla at California's Famoso Raceway and set the new speed record at 9.247 seconds for a quarter-mile.

That beat out the Bugatti's previous record of 9.4 seconds, set during a Car and Driver test of the $3m Italian hypercar late last year. Sadly for Leno, his record only stood for a few hours, with a Tesla specialist driver managing to shave the time down to 9.234 seconds shortly afterwards.

'That was awesome,' Leno said, celebrating the fact that he won the title of fastest production car driver. The Model S Plaid its Tesla's top-of-the-range S