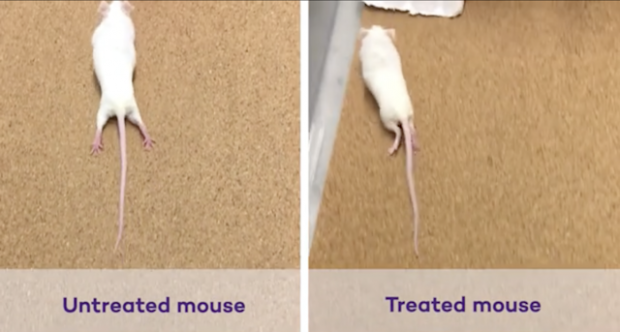 A new treatment that promotes the regeneration of cells has helped reverse paralysis in mice with spinal injuries, allowing them to walk again within four weeks, a stunning report by a team of US scientists claims.

The team of Northwestern University scientists behind the newly-published research injected a gel into tissue surrounding the spinal cords of lab mice 24 hours after an incision was made in their spines.

The team decided to wait a day because humans who receive devastating spinal injuries from car accidents, gunshots and other traumatic events also experience delays in getting treatment.

Four weeks later, mice who received the treatment regained their ability to walk almost as well as before the injury. Those left untreated did not.

'The aim of our research was to develop a translatable therapy that could be brought to the clinic to prevent individuals from becoming paralyzed after major trauma or disease,' said Northwestern's Samuel Stupp, who led the study.

Stupp wants the FDA to approve human trials because the nervous system is highly similar across mammal species and 'there is nothing out there to help spinal cord injury patients, and this is a huge human problem,' he said.