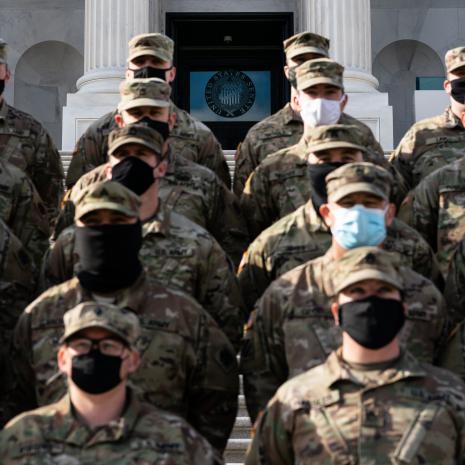 Army Brig. Gen. Thomas Mancino was announced as the state's new adjutant general Wednesday, though he has not yet been confirmed by the state Senate, according to a press release from Gov. Kevin Stitt's office.

On Nov. 2, Stitt formally requested that DoD not enforce the mandate on the state's Army and Air National Guard members. In the letter, which his office posted online, he said that 10% of the state's troops had refused the vaccine and that the mandate was "irresponsible."

The Defense Department is aware of the Mancino memo and Stitt's letter and "will respond to the governor appropriately," Pentagon spokesman John Kirby said in a statement.

He did not elaborate.

"That said, Secretary Austin believes a vaccinated force is a more ready force," said Kirby. "That is why he has ordered mandatory vaccines for the total force, and that includes our National Guard, who contribute significantly to national missions at home and abroad."

The state's former top general, Army Maj. Gen. Michael Thompson told local reporters Thursday that he learned who his replacement was via social media. He was previously scheduled to transfer command to Mancino on Jan. 15, 2022, according to the Oklahoman.

The day after taking the reins from Thompson, Mancino issued a policy memo declaring that the state would not enforce the mandate on its troops when they are under state control. The move is an apparent rejection of DoD's orders to discipline and ultimately discharge servicemembers who reject the vaccine.