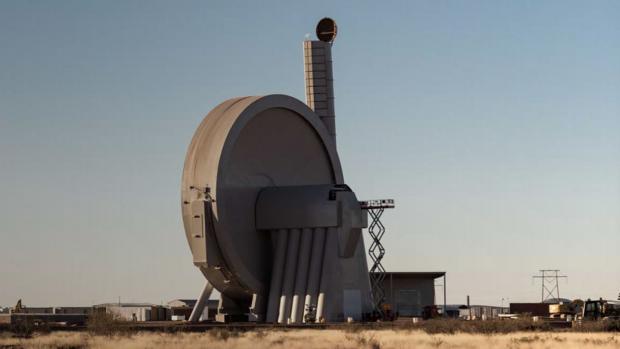 Startup SpinLaunch has been exploring such possibilities through the development of what it calls the world's first kinetic space launch system, and it's recently completed its first test flight.

SpinLaunch has been developing its alternative launch system since 2015, imagining a future where satellites and spacecraft can escape the Earth's atmosphere with zero emissions. It aims to achieve this with the help of a giant accelerator powered by an electric drive that it says could cut fuel use by four times and the costs by 10 times compared to traditional rocket launches, while also firing multiple payloads into orbit each day.

Initially, it is pursuing these ambitions through its Suborbital Accelerator. This consists of an upright disc-shaped, vacuum chamber slightly taller than the Statue of Liberty that uses a carbon fiber tether to whip a projectile around to speeds of up to 5,000 mph (8,047 km/h), many times the speed of sound, before releasing it through a launch tube and upward through the atmosphere.

A larger system, the L100 Orbital Mass Accelerator, would operate on a similar principle, and is being developed to launch satellites weighing up to 440 lb (200 kg). The company says advances in electronics that enable relatively small capacitors, chips and resistors allow these components to be ruggedized to survive the 10,000 g in the fast-spinning launch chamber, and its testing has proven satellite systems are capable of enduring such conditions.