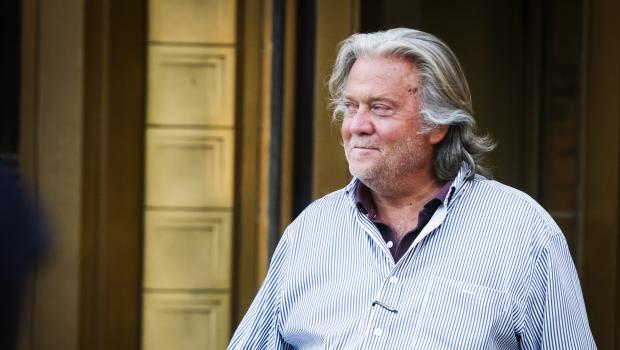 Bannon, 67, was charged with two counts of contempt of Congress following his refusal to comply with demands to produce documents and sit for a deposition as part of that investigation.

Each count of contempt of Congress is a misdemeanor punishable by up to one year in jail and a maximum fine of $100,000.

Bannon will be subject to general supervision requirements as part of the conditions of his release, Magistrate Judge Robin Meriweather said during Bannon's brief initial appearance. He will have to regularly report to pretrial services and alert them to any plans to travel outside Washington.

Bannon has also surrendered his passport and agreed not to obtain any other international travel documents.

Bannon did not enter a plea at the hearing. He is scheduled to appear before U.S. District Judge Carl Nichols, an appointee of former President Donald Trump, on Thursday at 11 a.m. ET.

Appearing outside the FBI's Washington field office before turning himself in, Bannon claimed he and his allies were "taking down the Biden regime."

"I want you guys to stay focused, stay on message," Bannon said in remarks being livestreamed to a right-wing social media platform.

Bannon is just one name on a growing list of Trump's associates called to cooperate with the bipartisan House select committee's probe of Jan. 6, when hundreds of Trump's supporters stormed the Capitol and temporarily stopped Congress from confirming President Joe Biden's victory in the 2020 election.