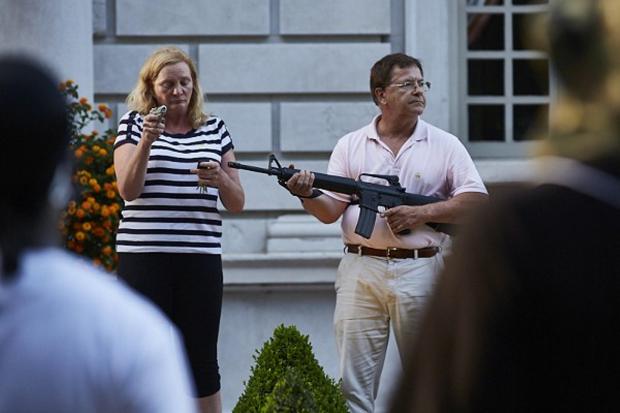 A Missouri couple who made headlines by standing on the steps of their home and pointing their guns at Black Lives Matter protesters as they passed turned up outside the Kenosha courtroom on Monday to show their support for Kyle Rittenhouse.

Mark and Patricia McCloskey, like Rittenhouse, were seen by some as icons of self-defense and champions of the Second Amendment. Others saw them as exemplifying all that was wrong with America and guns.

'We are just here to show our support for Kyle Rittenhouse,' Mark McCloskey told DailyMail.com.

'For the concept of self-defense. For our God-given rights under the Second Amendment to defend ourselves when necessary.

'And to hope that the jury acquits on all counts.'

The pair made national headlines when, on June 28, 2020, they brandished their guns at BLM demonstrators, marching past their St Louis house on the way to a rally outside the home of the mayor of St Louis, Lyda Krewson, several blocks away.

President Donald Trump retweeted video of the confrontation and later commented that the McCloskeys were going to be 'beat up badly, if they were lucky.'

But in July 2020, city police searched and seized both of the guns from the couple.

About a month later, St Louis Circuit Attorney Kim Gardner charged both with 'unlawful use of a weapon', which is a felony. The complaint said that both had displayed their semi-automatic weapons 'readily capable of lethal use, in an angry or threatening manner'.