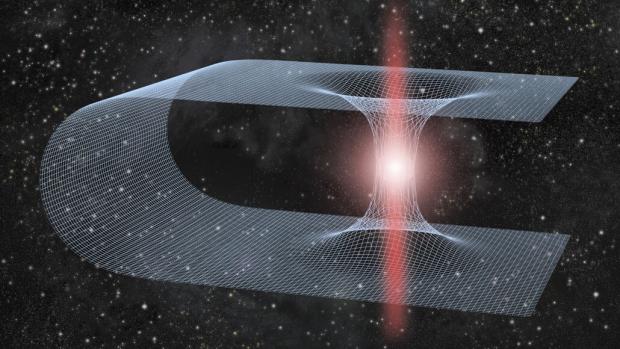 Wormholes might be more stable than previously predicted, according to a new study, that found they could be used to transport spacecraft across the universe.

Also known as an Einstein-Rosen Bridge, the theoretical interstellar phenomenon works by tunnelling between two distant points in space - like a worm hole.

These portals between black holes were once thought to instantly collapse once forming, unless an unknown for of exotic matter could be deployed as a stabiliser.

However, a new study by physicist Pascal Koiran, from the École normale supérieure de Lyon, in France, looked at them using a different set of techniques.

He found that a particle could be documented crossing the event horizon into the wormhole, go through it and reach the other side in a finite amount of time.

If a particle can traverse a wormhole safely, humans may be able to take a spacecraft through and reach a distant planet in a galaxy far, far away, Koiran suggests.

Wormholes have never been observed, but their existence is compatible with Einstein's General Theory of Relativity, and they are a mainstay of science fiction.

The concept of wormholes are usually studied using something known as the Schwartzchild metric, named for Karl Schwarzschild, which is used to study black holes.