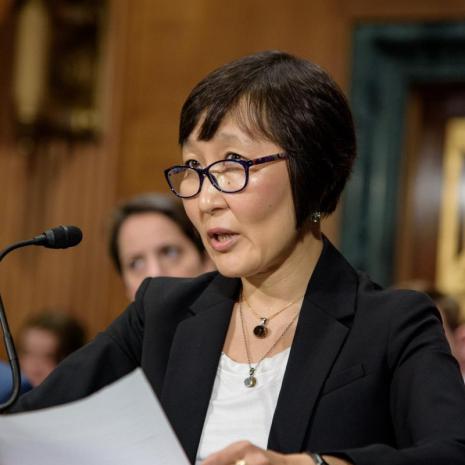 President Joe Biden's nominee to oversee the to lead the Office of the Comptroller of the Currency was arrested for stealing four pairs of shoes, two bottles of cologne, two belts and socks worth $214 from TJ Maxx in 1995, it was revealed on Wednesday.

Since the White House announced it was tapping Cornell University professor Saule Omarova, 55, to lead the agency overseeing the country's largest banks, revelations about the Soviet-born academic's radical views have surfaced.

Omarova reportedly placed the hodgepodge of stolen items, including  four pairs of shoes, two bottles of cologne and socks worth $214, into a large purse and hid them by covering the bag with other clothing items.

A security agent from TJ Maxx who was on-duty and saw Omarova steal told Fox News that she also paid for multiple items at the jewelry counter but 'made no attempt to pay for the items concealed in her purse'.

The agent, who remained unidentified, said he then confronted her as she left the store with the stolen items, at which point she 'immediately requested to pay for the items' and was 'cooperative' as the security agent told her he was signing a complaint about her leaving the store with things she didn't pay for 'without his consent'.