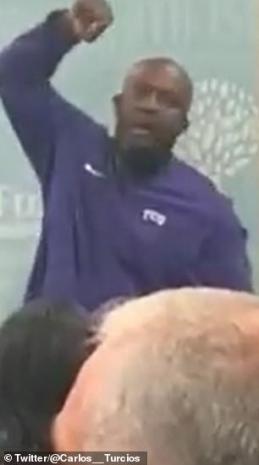 Ladonna Meyers, a grandmother of two, filed the report with federal agents following a meeting on November 9 of the Fort Worth Independent School District board.

During the meeting, local father Malikk Austin, who supports Critical race Theory (CRT), addressed anti-CRT protestors, telling them: 'For those who got an issue with this critical race theory equity, this is something I fight for, for my children.

'How dare you come out here and talk about the things that my daddy and my grandparents went through? The lynching, the oppression, Jim Crow — and my kids are still being afflicted by this.'

Speaking about her report to the FBI, Meyers, who had been present at the school board meeting, told Fox News: 'It's their job to check in on terrorism, and this was a terrorist threat.'

School board meetings nationwide have become a flash point of controversy over the teaching of critical race theory, which critics say makes children feel guilty for being white.

Supporters of CRT claim that it is vital to 'center' the experiences of black people and other minorities in educational curricula which until now has been taught predominantly through the prism of white Americans.