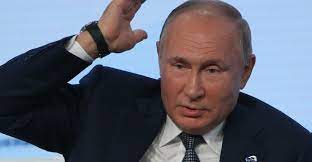 "We're constantly voicing our concerns about this, talking about red lines, but we understand our partners — how shall I put it mildly — have a very superficial attitude to all our warnings and talk of red lines," Putin said in a foreign policy speech.

The Russian leader has warned NATO against expanding cooperation with Ukraine, but NATO countries continue to do so. This week, the UK signed a new navy deal with Kyiv to build warships for Russia's neighbor.

Al Jazeera detailed that "Putin said Russia needed to seek long-term guarantees of its security from the West, though he said this would be difficult and did not spell out what form the assurances should take.

"But the tone has sharpened in recent weeks as Kyiv and NATO member states have raised fears over renewed Russian troop movements near its frontier with Ukraine after Moscow conducted war games in the region earlier this year," the report added.

The US and NATO have stepped up military activity in the Black Sea, which Moscow views as a major provocation. Putin described this activity as going "beyond boundaries" and said a Western strategic bomber recently flew within 20 kilometers (12.5 miles) of Russia's borders. US B1-B bombers recently flew over the Black Sea, but it's not clear how close they were to Russian territory.

Putin said that NATO has destroyed all mechanisms for dialogue with Moscow. The military alliance recently expelled diplomats from Russia's mission to NATO in Brussels, and Moscow responded by closing the mission.