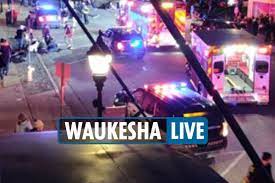 A reported mass casualty event has been reported at the Waukesha, WI Christmas parade, after a red SUV allegedly broke through the police line, plowed through pedestrians, and began firing round out of the window. It is unclear at this time how many people have been injured or killed, however at least four people have been reported as having been hit and 'not moving.'

The driver has not been identified as of this writing.

According to WISN's Courtney Sisk, the SUV hit the "dancing grannies" before speeding off, leaving "at least four members" on the ground and were not moving. One of the group's members reportedly flew 'over the hood' of the SUV.

"At the Waukesha Holiday parade and a car just broke through the police line, plowing through pedestrians and firing rounds out the window. Family and I are safe. Happened 20 feet in front of us," wrote Twitter user Zach Heisler (@zrheisler).

The Landmark Sandy-Hook Shooting Trial Begins, but Will the Court Block Discovery?

Pentagon On Lockdown After Shots Fired At Nearby Metro Station

If It Bleeds It Leads: How the American Media Perpetuates and Profits from Mass Shootings

Unbelievable! The Feds Knew And Did NOTHING??