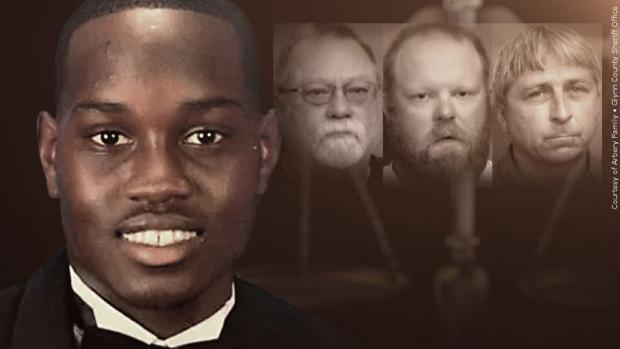 The February 2020 slaying drew limited attention at first. But when video of the shooting leaked online, Arbery's death quickly became another example in the nation's reckoning of racial injustice in the way Black people are treated in their everyday lives.

Now the men all face a mandatory sentence of life in prison. The judge will decide whether their sentences are served with or without the possibility of parole.

As the first of 23 guilty verdicts were read, Arbery's father had to leave the courtroom after leaping up and shouting. At the reading of the last criminal count, Arbery's mother dropped her head and quietly pumped her fists.

"He didn't do nothing but run and dream," Marcus Arbery Sr. said of his son. Outside the courthouse, dozens of Black supporters hugged and cried.

The McMichaels grabbed guns and jumped in a pickup truck to pursue the 25-year-old Arbery after seeing him running outside the Georgia port city of Brunswick. Bryan joined the pursuit in his own pickup and recorded cellphone video of Travis McMichael fatally shooting Arbery.

The father and son told police they suspected Arbery was a fleeing burglar. But the prosecution argued that the men provoked the fatal confrontation and that there was no evidence Arbery committed any crimes in the neighborhood.

"We commend the courage and bravery of this jury to say that what happened on Feb. 23, 2020, to Ahmaud Arbery — the hunting and killing of Ahmaud Arbery — it was not only morally wrong but legally wrong, and we are thankful for that," said Latonia Hines, Cobb County executive assistant district attorney.