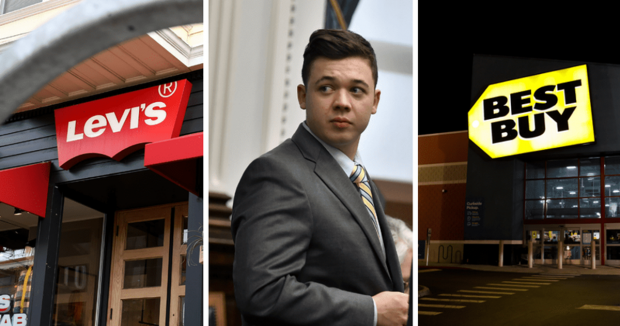 Best Buy and Levi Strauss are both facing a customer boycott after offering their employees counselling over Kyle Rittenhouse's not guilty verdict.

Following the news that the teenager was acquitted, the two companies sent out memos telling their employees that counselling was available, with Levi's offering sessions with a 'racial trauma specialist' to 'encourage healing.'

However, people took social media to slam the companies and their woke response to the ruling, with some threatening to boycott their stores and cancel orders.

'@BestBuy is actually offering counseling to employees for the jury getting the verdict in the Rittenhouse trial correct. They just lost a long standing customer in me,' one user wrote on Twitter.

Another took aim at Levi's, writing: 'The race for most woke company marches on and I can no longer buy 501s, which I have worn for 40+ years. These idiots destroy everything.'

Another user on Twitter said they would be cancelling orders that had made with Best Buy, and claimed more would do the same.