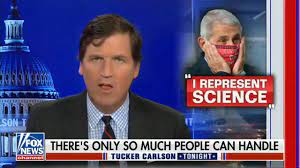 Carlson drew a comparison between Fauci and Benito Mussolini, saying he was 'even shorter' than fascist Italian dictator, even though they were both 5-foot-7

Fauci gave an interview on Sunday on CBS' Face the Nation, in which he argued that those who criticize him criticize science

Mengele, dubbed 'Angel of Death,' was a doctor at Auschwitz death camp who performed hideous experiments on prisoners