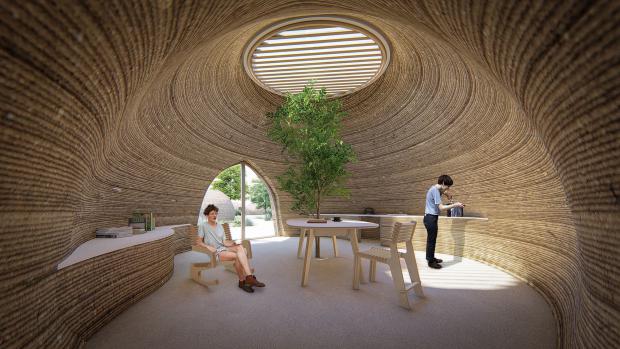 They may look like something ancient desert civilisations would have constructed centuries ago.

But actually these are the world's first eco-sustainable houses – 3D printed in Italy using locally-sourced soil – and could one day be the homes of the future.

They are the brainchild of architect Mario Cucinella, who hopes the 'state-of-the-art building technology' can help combat homelessness and displaced communities after emergencies or natural disasters.

He has dubbed them TECLA houses in a nod to the combination of technology and clay.

'We like to think that TECLA is the beginning of a new story,' said Cucinella.

'It would be truly extraordinary to shape the future by transforming this ancient material with the technologies we have available today.

'The aesthetics of this house are the result of a technical and material effort; it was not an aesthetic approach only.'

He added: 'The goal was to match the agenda of 2030 in Europe of zero emissions.'

The first set of domed homes have been built in Massa Lombarda, near Ravenna in Italy, using multiple 3D printers operating simultaneously.

In their most basic form they can be created in just 200 hours of printing.

The prototype, which measured in at 645 square foot, was built up in layers without the need for scaffolding.

It is made up of two round, bulbous structures merged together. No cost has yet been revealed by Cucinella.

Inside is space for a living room, bathroom and bedroom, while there are also fitted furnishings such as tables and chairs that were also created using a 3D printer.