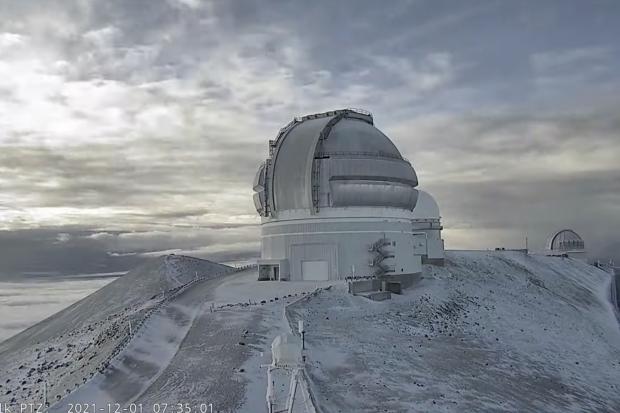 "A cold front will move across the island chain tonight and Friday, then stall near the Big Island Saturday," the National Weather Service (NWS) in Honolulu tweeted. "Low pressure will drop down toward the state later in the weekend and into early next week, with wet weather expected across most of the state."

"Travel could be very difficult to impossible," NWS said. "Blowing snow will significantly reduce visibility at times, with periods of zero visibility."

"The strong winds will likely cause significant drifting of snow," it added.

Snow on the tropical island may surprise many but is common at higher elevations. However, blizzards are rare and come every 2-3 years.

A flash flood watch is in effect for low elevations through Monday afternoon.

"Significant flooding may occur due to the overflow of streams and drainages," NWS said. "Roads in several areas may be closed, along with property damage in urban or low lying spots due to runoff...Landslides may also occur in areas with steep terrain."

And, of course, Greta Thunberg and her youthful climate-change gang, usually spewing the Left's environmentalist armageddon narrative, remains silent while blizzard conditions are expected in Hawaii this weekend.