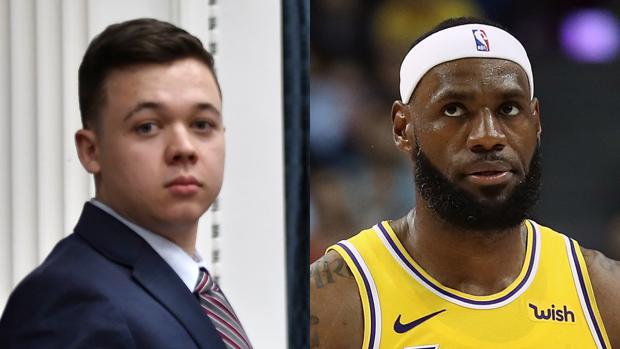 Kyle Rittenhouse lashed out against NBA star LeBron James for poking fun at his tearful testimony during the Kenosha shooting trial on Twitter last month.

Rittenhouse, 18, who was dramatically acquitted in the shooting of Joseph Rosenbaum and Anthony Huber during a Black Lives Matter protest in Kenosha, Wisconsin, last year, appeared on the You Are Here conservative podcast on Monday, when the hosts began bashing James.

During the trial, the Lakers player mocked Rittenhouse for breaking down while giving testimony. In a Twitter post, he wrote: 'What tears? I didn't see one. Man knock it off! That boy ate some lemon heads before walking into court.'

But speaking to podcast co-hosts Sydney Watson and Elijah Schaffer this week, Rittenhouse hit back saying: 'I was really p****d off when he said that because I liked LeBron, and then I'm like, you know what, f*** you, LeBron.'

Watson added: 'You have to give the man credit. It took all four of his brain cells to construct that tweet.'

Rittenhouse had broken down on the stand last month as he recalled killing Joseph Rosenbaum and Anthony Huber during a Black Lives Matter protest in Kenosha, Wisconsin, last year.

He was there to provide assistance to local businesses against protesters who had been damaging the shops on August 25, 2020.

The protests were held in Kenosha after a white officer was acquitted for shooting Jacob Blake, a black man who was left paralyzed.