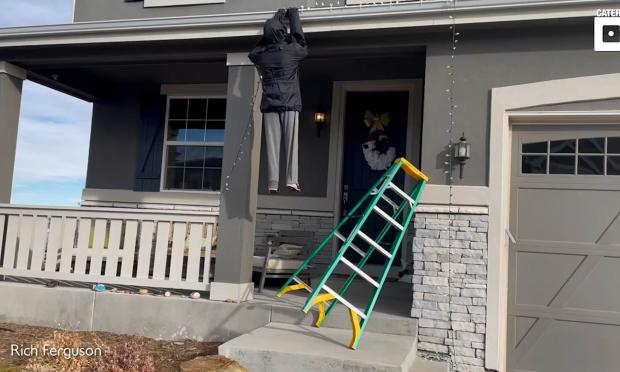 A prankster tricked his neighbors into thinking a person was clinging to his gutter after toppling off a ladder while hanging up their Christmas lights.

Rich Ferguson, 51, put up half the Christmas lights at his house in Colorado and then hung a mannequin off the porch roof to to make it look like someone had knocked over their stepladder while putting up the decorations.

He then set up hidden cameras to record how his neighbors reacted when they saw what they thought was a person in need of urgent help.

One woman was filmed rushing over to stand up the stepladder and assist the dummy before realizing she had been pranked.

In his video, Mr Ferguson shows the outside of the house and explains how the prank will work.

He says: 'This is freaking hilarious. So I have this dummy who was stringing up some lights and after a few feet the ladder fell down and so now he's just hanging here by his arms.'

Mr Ferguson shows a hidden camera positioned on the roof, and another on the grass in front of the house, and says: 'We're going to see if we can capture the reactions of some passers-by.'

The video then cuts to the camera on the roof as it shows a dog walker, dressed in a maroon jumper and black trousers, as she rushes over to help.

She moves the ladder towards the mannequin before realizing she has been caught out by the prankster.