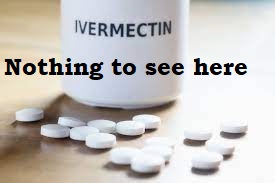 A drug that can demonstrably ameliorate suffering and shorten the duration of illness should be studied further and considered as a treatment option in hospital settings. The FDA, CDC and NIH need to get out of the way and let the scientific method bring forth the best anti-viral, immune-modulating compounds for the proper treatment and care of sick patients.

In this study, seventy-two patients were admitted to the hospital with symptoms associated with covid-19, including fever, cough and sore throat. The patients were divided into three groups. The first group received oral ivermectin only. A 12 mg dose was administered once daily for five days. There were no side effects reported. The second group received the 12 mg dose of ivermectin along with a regime of doxycycline. On day 1, doxycycline was administered at 200 mg. Another eight doses of 100 mg doxycycline were administered every twelve hours over the course of the next four days. The final group was the placebo control group.

The symptoms cleared up faster for the ivermectin group (9.7 days), compared to both the ivermectin plus doxycycline group (11.5 days) and the placebo group (12.7 days). Larger clinical trials can help confirm ivermectin as a safe intervention to speed up recovery from respiratory illnesses associated with SARS-CoV-2.