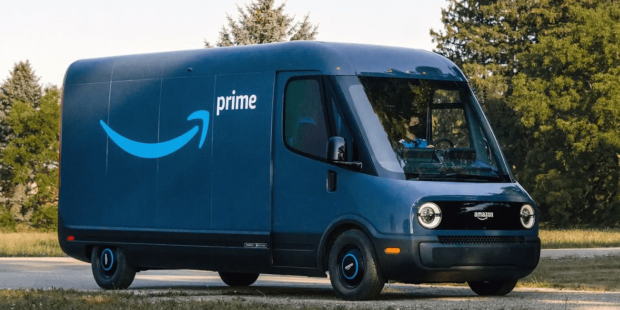 Our good friend MissGoElectric recently spotted an Amazon Rivian electric delivery van not far from where some of us at InsideEVs call home. She saw the electric van in Woodhaven, Michigan, which is south of Detroit.

MissGoElectric also notes that she discovered the Amazon electric Rivian van at an EVgo charging station that is "rather rusty." However, perhaps the most interesting or important observation here is the electric delivery van's size. MissGoElectric captured the quick video will inside a Tesla Model S.

Apparently, MissGoElectric – and likely other folks – didn't expect the Rivian electric van to be so huge. We've seen it many times before, from clay models indoors to prototypes out testing and practicing delivery routes. While the van certainly never appeared to be small, it arguably seems even larger once you have some surroundings to compare it to.

We'd love to see the Amazon electric van up next to some of the company's gas-powered delivery vehicles. However, as you may know, there doesn't seem to be a whole lot of consistency when it comes to the online retailer's current fleet of delivery vehicles. We've seen everything from traditional full-size cargo vans to box trucks that look like those you use for moving.

That said, Rivian could have gone with a smaller vehicle to help with range, but instead, it made its electric delivery van impressively large. Not only is it big, but also uniquely designed.

For us at InsideEVs, and likely most people who follow the space, it would be hard to confuse the Rivian van with Amazon's other vehicles. However, the average Joe or Jane, especially if they're not apprised or paying much attention, may not even realize that it's the Rivian van or that it's electric.

This Diesel Tesla Got a YouTuber in Trouble With the EPA