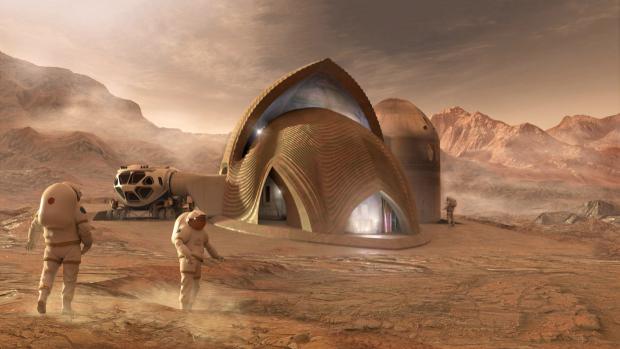 Putting a human base on Mars has long been an aspiration for us Earthlings.

For centuries people have been fascinated by the dusty and desolate Red Planet, ever since its discovery by Galileo in 1610, and as the mystic grew, so too did thoughts that little green men might be running around on it, an image popularised in magazines and on TV during the 1950s and 60s.

Moon race fever had gripped the world, and after Neil Armstrong became the first man to walk on the lunar surface in 1969, the human race almost immediately set its sights on the next target of Mars.

Though manned space exploration beyond Earth's orbit stalled in the decades that followed, a new space race involving billionaires Elon Musk, Jeff Bezos and Sir Richard Branson has reignited ideas for people to set foot on other worlds beyond our own.

Chief among them is SpaceX CEO Musk, who has stated his desire to create a colony of one million people on Mars by 2050.

But if and when we do get there, what will a human base look like to enable people to survive and ultimately live on the Red Planet?

MailOnline has looked at some of the leading concepts from companies and organisations across the globe to get a flavour of the vision for life on Mars, and which ones are most likely.

One such idea, from Texas-based construction tech startup ICON, is being built in partnership with NASA.

Bearing similarities to the HAB, short for The Mars Lander Habitat, in Matt Damon's 2015 blockbuster The Martian, the company's 3D-printed building features a 55-inch TV, fitness room and areas to grow crops.

This is the preferred technology for constructing extraterrestrial habitats because of the lack of building materials required.

The 158-square-metre 'habitat', known as Mars Dune Alpha, is currently under construction at the Johnson Space Center in Texas.

In August the US space agency said it was welcoming applicants to take part in a one-year project to simulate life on a distant world, set to begin in autumn next year.