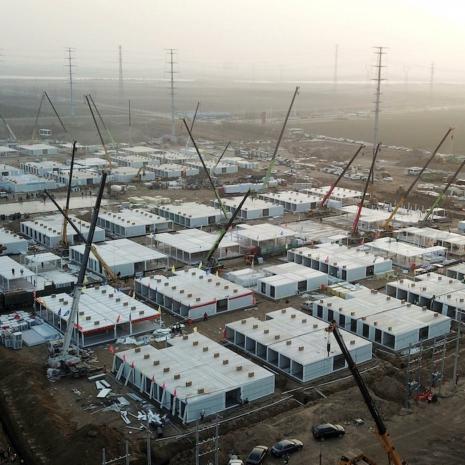 A locked-down city in China has turfed 1,000 people out of their homes at midnight and carted them off to grim quarantine facilities, according to local reports.

Xian's 13 million residents have been confined to their homes since December 23 and are banned from leaving even for food and essential supplies, having to rely on local officials to drop off care packages.

The popular tourist hub, famed for its Terracotta Warriors, has reported 1,600 cases since December 9 - and although this may seem a small figure, Beijing is desperate to stamp out the virus ahead of the Winter Olympics next month.

But its aggressive 'zero Covid' strategy is being tested to the limits by the new epicentre of Xian.

In the latest shocking measure, 30 busses turned up in the Mingde 8 Yingli neighborhood at just after midnight on January 1 and ordered all residents they must leave and go into quarantine.

One user claimed that up to 1,000 people were carted off, while another said that 30 busses were spotted around their block.

1 Comments in Response to Locked-down Chinese city evicts '1,000 people' from their homes at midnight and transports..