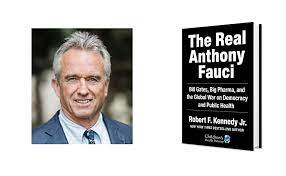 His is a very rare moral courage, and he is asking us to join him, before it is too late and we enter into a new dark age, in recognizing and resisting the evil forces intent on stamping out democracy around the world.  He is not pulling his punches with language as he accuses the political-intelligence-media-money-medical-corporate-pharmaceutical conspirators of executing "the controlled demolition of American constitutional democracy."  For a brilliant and highly accomplished lawyer and excellent writer and speaker, the choice of those words "controlled demolition" is clearly intentional.

For anyone who doubts that the Covid-19 crisis is an intelligence-run operation controlled by spooks working with medical technocrats like Anthony Fauci, billionaires such as Bill Gates, the military, media, Big Pharma, the World Economic Forum, etc., a close reading of this book – with its 2,194 references – will disabuse one of that illusion.

The CIA has long been deeply involved with vaccines, viruses, drugs, weaponizing cancer, biological weapons, and of course massive mind-control operations – deadly propaganda in plain English – for use in controlling U.S. Americans and foreigners alike.  As Kennedy writes in an ironically understated way, "The pervasive CIA involvement in the global vaccine putsch should give us pause."  Yes, a long pause.  He continues: