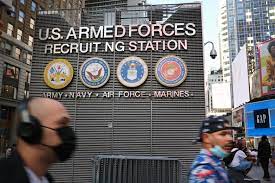 To lure new recruits, the Army is rolling out with its maximum enlistment bonus of $50,000 - to be offered on a broader scale for all "highly skilled" recruits who agree to sign a six year contract, according to the Associated Press.

Aside from the likelihood that many young people are surely turned off to the prospect of enduring already rigorous boot camp and training in a mask and other social distancing practices, military recruiters say they had a tough past couple years during rolling school closures and restricted campuses, due to pandemic shutdowns and distance learning.

In addition, youth sporting events are typically places where recruiters are present, but these have also been sporadically halted. Recruiters say the current spike in the Omicron variant is also playing a role in keeping interested people away, and increasing numbers of 18- or 19-year-olds are opting to take a 'gap year' off before they decide on either college or military service.

"We are still living the implications of 2020 and the onset of COVID, when the school systems basically shut down," the chief of Army Recruiting Command, Maj. Gen. Kevin Vereen, told AP. "We lost a full class of young men and women that we didn't have contact with, face-to-face."

The Truth About That Army Drill Battling with American "Freedom Fighters"

"Bubble Trouble: what you need to know from the derivatives markets"