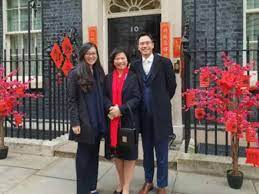 Christine Lee, a London-based lawyer, has been monitored by the security services for some time

Parliament was hit by a major security alert today as spooks warned MPs that a Labour donor with links to a former minister was a Chinese spy.

Christine Lee, 58, has been monitored by the security services for some time, parliamentarians were told in a bombshell email this afternoon.

She has not been arrested and is not being expelled as it stands, but a warning memo was sent to all MPs and peers in Westminster today by the Speaker's Parliamentary security team.

An attached alert said the a twice-married mother of two who lives in the affluent Birmingham suburb of Coleshill, was 'knowingly engaged in political interference activities on behalf of the United Front Work Department of the Chinese Communist Party'. No politicians are suspected of any criminality.