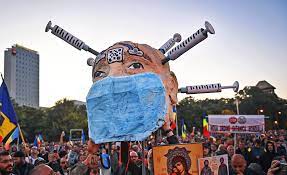 Just before Christmas, as the Omicron surge was picking up steam, White House coronavirus response coordinator Jeffrey Zients issued a remarkable statement. He began by reassuring "the vaccinated" that "you've done the right thing, and we will get through this", but followed this optimistic bromide with a dose of fire and brimstone: "For the unvaccinated, you're looking at a winter of severe illness and death for yourselves, your families, and the hospitals you may soon overwhelm."

This rhetoric seemed unlikely to spook any of the vaccine-hesitant into getting jabbed. After all, they have already been exposed to plenty of dire warnings about the virus, and are unlikely to be receptive to the admonitions of an administration they have already ignored. Rather, the real addressees of Zients's sermon were the vaccinated, who could assure themselves that they are on the side of the good.

Early in the Covid era, many believed the virus had made clear that "we're all in this together". The pandemic, we were told, would instil a sense of collective responsibility premised on our biological interconnectedness. Yet the reality, starkly revealed by Zients's proclamation, is that we have entered a new age of biopolitical balkanisation, evident not only in the drastic policy divergence between red and blue states but also in the latter's attempts to exclude the unvaccinated from public life.

Zients's boss, Joe Biden, campaigned on the idea that technocratic competence and faith in expertise would end the pandemic. He also promised to scale back the culture wars of the Trump era. "We can," he said in his inaugural address, "join forces, stop the shouting, and lower the temperature." This may have been standard political pablum, but it reflected a genuine hope that a less divisive — even pleasantly boring — four years might follow the tumultuous Trump era.

For Leftists, Your Freedom Is Their Misery Your Slavery Is Their Joy