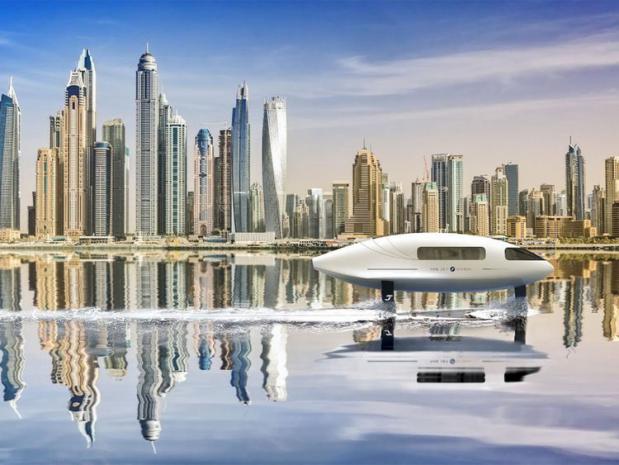 The world's first hydrogen-powered flying boat that can soar three feet above the water's surface will be built in Dubai next year, authorities have announced.

Simply called 'The Jet', the vehicle is set to be powered by two hydrogen fuel cells that produce no emissions as it sails smoothly over the waves 'in silence'.

The Jet will also use 'hydrofoils' – wing-like blades underneath the hull that cut through the water as the boat speeds up, creating an uplift, similar to the aerofoils used on airplanes.

Once built, The Jet will span 32 feet, weigh 6 tones and be able to transport up to 12 passengers plus a pilot over waters at a cruising speeds of up to 40 knots, or 46 miles per hour.

Concept images of The Jet show an unusual slender white vehicle with blacked out passenger windows, like a marine version of a swish limousine.

The Jet's designer, Switzerland-based start-up THE JET ZeroEmission, has signed an agreement with the UAE's Zenith Marine Services to manufacture the vehicle.

The city will also host the first ever test run of the vehicle, in November 2023, to coincide with COP28, next year's United Nations Climate Change Conference.

THE JET ZeroEmission was founded by French yachtsman Alain Thébault, and has been able to secure part of the required funding of 10 million Euros (£8.3 million) as part of the agreement. The company has not closed fundraising yet, and is interested in discussions with new potential investors.