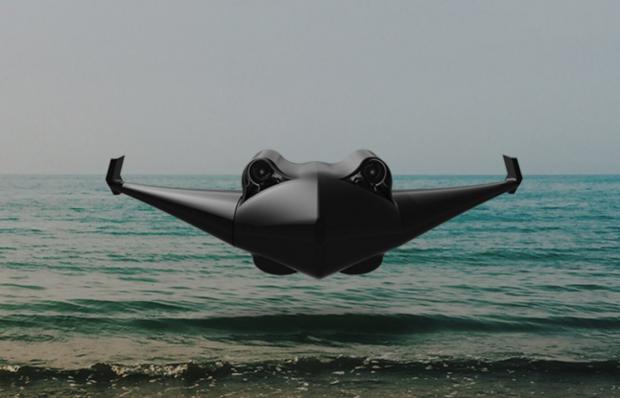 The USAF's AFWERX High-Speed Vertical Takeoff and Landing (HSVTOL) concept challenge sees the military throwing the floor open to a range of private companies in search of ideas that'll eventually lead to next-gen VTOL aircraft capable of going a lot quicker than current VTOL machines like the V-22 Osprey.

Valkyrie's HoverJet Guardian concept certainly seems to fit the bill. Essentially, it appears to be a powerful, optionally-piloted jet aircraft with an electric VTOL system built in.

The VTOL system appears to use a quadcopter layout, with four props (or perhaps eight mounted coaxially) hiding in holes in its fat wings. These get it off the ground in relatively civilized fashion, but then a pair of Pratt & Whitney 545c turbofan engines take over, adding a combined 8,200 pounds of horizontal thrust to the mix.

That's considerably heavier, say, than the Joby S4, which is said to be around 8,820 lb (4,000 kg), and it uses fewer, smaller propellers. So those props are going to have to work hard. On the other hand, since it'll run primarily on jet fuel, energy storage won't be an issue at all, and the electric systems can be tuned for high power rather than efficiency.

High-speed VTOL is not all these things bring to the table, either. The Guardian, and its smaller brother, the Eagle UAV, are apparently capable of landing on water, and offering "three modes of operation: aircraft, hovercraft and amphibious." Exactly how the hovercraft mode works is a bit of a mystery at this point, but a VTOL aircraft capable of taking off and landing on nearly any surface, then flirting with the sound barrier once airborne, would clearly be a very useful platform.

Wheels up, as the gorgeous, electric Eviation Alice takes flight