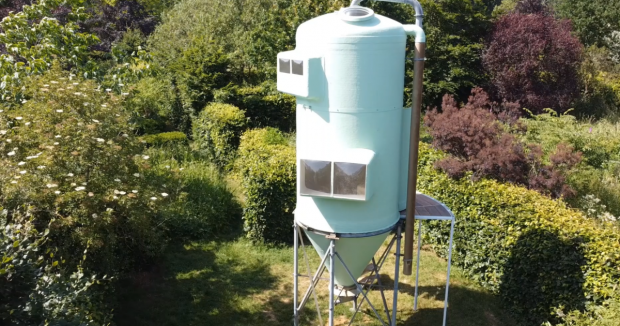 Now there's this charming example, which was made from an old grain silo by Netherlands-based Design Academy Eindhoven graduate Stella van Beers. Named Silo Living, its snug interior is split over two floors and squeezes in a small living area and a bedroom.

Silo Living came about when Van Beers contacted a local farmer who was selling a grain silo. After they'd had a chat, he liked her idea of turning it into a dwelling so much he decided to give it away for free.

The silo reaches a maximum height of 7 m (roughly 23 ft). It has been painted and had double doors cut into it and windows added. Another nice touch is a lookout point up top with a clear hatch. Access is gained by some external steps, and it's very compact inside. However, despite the lack of available floorspace, the first-floor living area does squeeze in some storage units, while a ladder leads up to the bedroom, which contains a 2 x 1.2 m (6.5 x 4 ft) bed.

The structure is definitely not intended as a permanent home – obviously, there's no running water, electricity, or even proper insulation, for example – but was instead built to meet Dutch planning laws for a "hiker's cabin," which means it can be legally occupied for multiple days at a time.

Silo Living was featured at Dutch Design Week 2021 as part of Design Academy Eindhoven's graduation show. Looking to the future, Van Beers next plans to take what she's learned from the creation of Silo Living to continue to develop silo-based micro-homes.