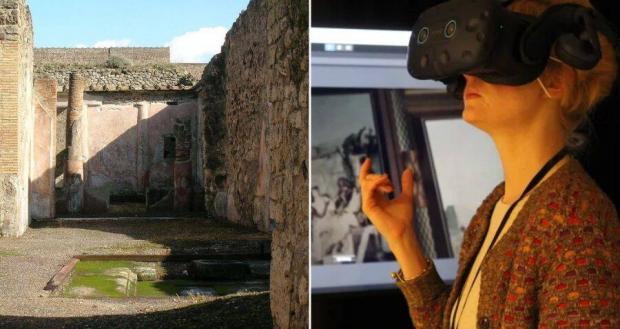 Before the devastating eruption of Mount Vesuvius in 79 AD, Pompeii was a thriving city with a population of up to 20,000 people.

Now, scientists have delved deeper into one of Pompeii's most beautiful homes, the House of Greek Epigrams.

While the house has been damaged through centuries of neglect, weathering and volcanic eruptions, researchers from Lund University have been able to rebuild it, using virtual reality and eye-tracking technology.

The House of Greek Epigrams is an impressive home in northeast Pompeii that was once decorated with intricate frescoes.

'Work and daily activities were intermingled during the day,' said Danilo Marco Campanaro, co-author of the study.

'The house communicated to people about the personal power and status of the owner and his family.'

Using the videogame engine Unity, the researchers reconstructed a 3D model of the house, complete with restored paintings.

The team then used spatial analysis and eye-tracking technology to monitor volunteers as they explored the House of Greek Epigrams in virtual reality.

This allowed them to measure the visual attention of volunteers as they toured the house, tracking what caught their eyes.