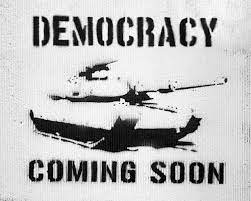 Listen to a reading of this article:

I remember feeling such solidarity with Democrats who opposed Bush's warmongering. I sincerely did not know it was just empty political posturing for them and they'd happily sign off on any war no matter how insane as long as the president doing it had a (D) next to their name.

All the Democratic Party's actions make sense when you switch from thinking of it as a political party whose job is to enact the will of voters to thinking about it as a narrative control operation whose job is to prevent the local riff raff from tampering with the gears of a globe-spanning empire.

An elephant and a donkey fight in a puppet show and the crowd cheers for one or the other while thieves pick their pockets. And when people start to notice their wallets are missing, they're told they can stop the pickpocketing by cheering louder for their favorite puppet.

People ask why the Democrats never codified Roe vs Wade into law, and the answer is, because that's not their job. Their job is not to enact the policies you elected them to enact. Their job is not even to win elections. Their job is to keep you staring at the puppet show while the empire has its way with the world.

Why Are Young People Converting to Conservatism? | Eric Duhaime | #289