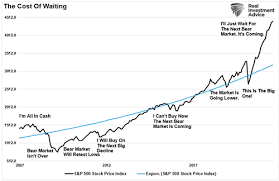 Is Kiyosaki just being hyperbolic, or should investors prepare for the worst?

Importantly, I received Kiyosaki's comment in an email that I could find out more by just clicking on the link to get a "free" report.

I can save you time, and future spam emails, by telling you that Kiyosaki will be correct.

However, the problem, as always, is "timing."

As discussed previously, going to cash too early can be as detrimental to your financial outcome as the crash itself.

Over the past decade, I have met with numerous individuals who "went to cash" in 2008 before the crash. They felt confident in their actions at the time. However, that "confidence" gave way to "confirmation bias" after the market bottomed in 2009. They remained convinced the "bear market" was not yet over, and sought out confirming information.

As a consequence, they remained in cash. The cost of "sitting out" on a market advance is evident.

"Who Will Be This Recession's Lehman?"

UTTER CARNAGE: The Stock Market Is Coming Apart Like A 20 Dollar Suit As Fear Sweeps...

Survival 101: Focus on What Will IMMEDIATELY Kill You, NOT Irrelevant Details

Border Patrol Agent Killed Texas Shooter After Rushing In With No Backup;

Hunter Biden Probe Ramps Up Ahead Of Midterms

Rabobank: Michael Burry Warns That The Economy Looks Like A House Of Cards... And He Is Right

The Air Is Coming Out Of The Housing Bubble

Are you prepared for power outage...Power Queen Lithium battery...Starting off grid system.