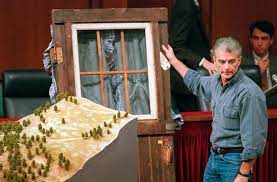 Randy Weaver, the Idaho survivalist whose refusal to surrender to federal agents led to the 11-day siege of his remote cabin in Boundary County, Idaho, passed away today, according to his daughter.

Weaver was a survivalist who built a remote cabin in the woods of Boundary County, near Ruby Ridge, in the 1980s. Federal agents began investigating him over allegations by a neighbor that he had made threats against government leaders. Then, in 1989, the Bureau of Alcohol, Tobacco and Firearms accused Weaver of selling sawed-off shotguns to an ATF informant. Charges were filed in June 1990; Weaver was arrested by ATF agents in January 1991, and told to appear for trial in February, but the court gave participants conflicting travel dates, and Weaver refused to appear, leading the judge to issue a bench warrant.

The United States Marshals Service initially put off the warrant until March, but the U.S. Attorney's Office convened a grand jury a week before the Marshals intended to enforce the warrant. Weaver simply chose not to surrender and remained inside the cabin in Ruby Ridge for a year and a half with his wife and children.

On August 21, 1992, deputies of the United States Marshals Service arrived at the cabin to arrest and take Weaver into custody in compliance with the bench warrant. The Marshals showed up in military camouflage and scouted the area. The family dog, Striker, was alerted to the marshals throwing rocks at the cabin, and Weaver, his son Sammy, and family friend Kevin Harris went to investigate. Sammy and Harris encountered the Marshals, who shot the dog and Sammy dead. Harris shot back, killing Deputy Marshal William Francis Degan.