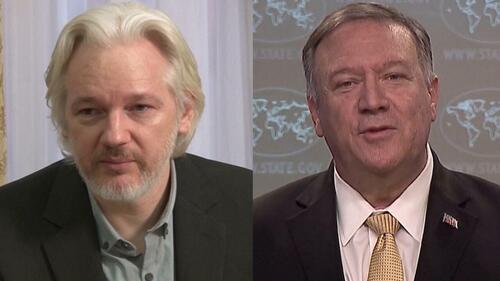 In a surprising development surrounding WikiLeaks and the fate of Julian Assange, who is still in London's Belmarsh prison awaiting awaiting a decision from UK Home Secretary Priti Patel on extradition to the US, a Spanish court has summoned former Secretary of State Mike Pompeo to testify on whether the CIA planned to assassinate WikiLeaks founder Julian Assange.

Pompeo was head of the agency during the time period that a bombshell Yahoo News investigative report last year revealed that the CIA allegedly plotted to kidnap or even kill Assange, following Washington outrage that WikiLeaks made public a batch of documents exposing the agency's ultra-secretive hacking tools known as Vault 7.

At the time, the Yahoo report quoted a former Trump national security official who described that Pompeo and other top intel officials "were completely detached from reality because they were so embarrassed about Vault 7 … they were seeing blood."

As ABC Spain reports, the summoning comes after filings by Assange's legal team related to his ongoing proceedings with the UK government:

According to legal sources consulted by ABC, Pompeo has been summoned this June, although he may appear by videoconference. The same resolution agrees to call William Evanina, a former key US counterintelligence official who reportedly made statements supporting that theory. Pedraz has made this decision after the prosecutor Carlos Bautista reported in favor of the petition filed by the lawyer Aitor Martínez who, together with Baltasar Garzón, defends Assange.