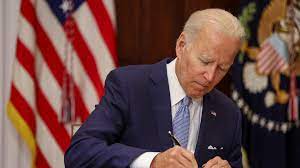 "I was there 30 years ago, the last time this nation passed meaningful gun safety laws and I'm here today for the most significant law to be passed since then," Biden said at a June 25 press conference at the White House.

The legislation, called the Bipartisan Safer Communities Act, passed the House on Friday in a 234–193 vote following Senate approval Thursday.

Key provisions of the bill include expanding federal background checks for people between 18 to 21, incentives for states to adopt so-called red flag laws, expanding access to mental health programs, and enhancing school security in a bid to prevent mass shootings.

"While this bill doesn't do everything I want, it does include actions I've long called for that are going to save lives," Biden said.

The legislation comes on the heels of mass shootings in Buffalo, New York, which killed 10 people, and Uvalde, Texas, which killed 21 people, including 19 children. Both gunmen were 18 years old.

"At a time when it seems impossible to get anything done in Washington, we are doing something consequential," the president said.

The people are lied to many times: America is deceiving not only its own people but the whole...