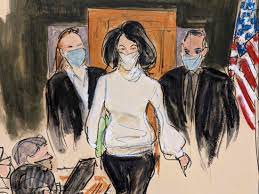 The sentence is less than the 30-50 years prosecutors asked for, but more than the 6 year sentence the defense thought was appropriate.

While preparing to deliver the sentence, Nathan said that "Ms Maxwell directly and repeatedly and over the course of many years participated in a horrific scheme" to traffic and abuse girls, and that "Ms Maxwell worked with Epstein to select young victims who were vulnerable."

As such, a "substantial sentence" is warranted, which - if not released early, means Maxwell will be 80-years-old when she gets out.

And somehow not a single Epstein client was named...

Judge Alison J Nathan said on Tuesday that Ghislaine Maxwell's criminal activity was "extensive," and that she's enhancing her sentence due to the fact that she was at least 10 years older than her victims, and exercised "undue influence" on them.

That said, Nathan said that the calculation for sentencing will hinge on whether evidence showed criminal conduct after Nov. 1, 2004 - and that there isn't evidence to support the higher-recommended guidelines of 30 - 50 years.

This means Maxwell will likely receive the more lenient guidelines calculation, which would result in less than 20 years in prison.

Jeffrey Epstein 'Madam' and partner in crime, Ghislaine Maxwell, is set to be sentenced today after being found guilty of participating in a decade-long scheme to lure and groom underage girls for sexual exploitation by Epstein and his associates - at times participating in the abuse herself, according to Bloomberg.