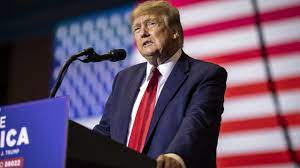 The rally will be held at the Findlay Toyota Center in Prescott Valley, Arizona, on Saturday, July 16th. President Trump is set to take the stage at 4:00 pm.

President Trump has made Arizona a major focus since the Fraudulent 2020 Presidential Election that was certified by Governor Doug Ducey and covered up by officials across the state.

The Gateway Pundit recently reported that President Trump Truthed a statement announcing the start of early voting in Arizona and urging Patriots to vote for Kari Lake, the only candidate vowing to get to the bottom of the stolen election and fight for election integrity once elected. Lake's primary opponent is a total RINO who is endorsed by Doug Ducey.

President Trump is also fighting to elect Senate Candidate Blake Masters, who is running against RINO Mark Brnovich, the weak Arizona Attorney General who failed to enforce the law when presented with evidence of hundreds of thousands of fraudulent and questionable votes.