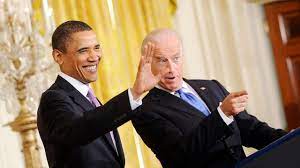 As we have previously highlighted, Jackson has on multiple occasions suggested that Joe Biden appears not fit for office and should take a cognitive test.

Jackson has asserted that the "White House is doing everything they can to hide Biden's obvious cognitive decline," further noting that his handlers "know that if they gave him a cognitive test, that he would have failed miserably, and then they would have had to explain that away somehow."

Jackson has also made the point that the left repeatedly demanded that Donald Trump take a cognitive test while president and make the results public, which he did with Jackson at the helm.

Seemingly though, Barack Obama appears to have a big problem with Jackson speaking out as a doctor.

Jackson shared with Fox News the letter Obama sent him in which the former president "just tore me up," according to the doctor.

"I have made a point of not commenting on your service in my successor's administration and have always spoken highly of you both in public and in private," Obama wrote, adding "You always served me and my family well, and I have considered you not only a fine doctor and service member but also a friend."

"That's why I have to express my disappointment at the cheap shot you took at Joe Biden via Twitter," he continued, charging "It was unprofessional and beneath the office that you once held. It was also disrespectful to me and the many friends you had in our administration."