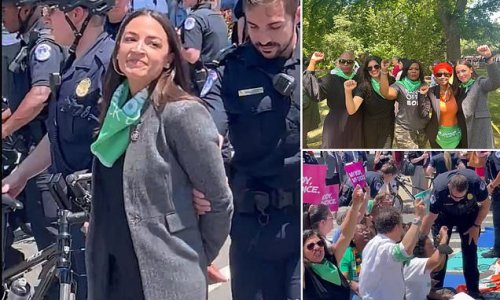 Ocasio-Cortez was seen walking escorted away by police with her hands crossed behind her back, as if she were in handcuffs, but she was not

A total of 34 arrests - 16 of them members of Congress - were made at the demonstration Tuesday, according to Capitol Police

Progressive Reps. Alexandria Ocasio-Cortez, Ilhan Omar  and other Democratic members of Congress were arrested outside of the Supreme Court on Tuesday protesting the overturning of Roe v. Wade.

Ocasio-Cortez was seen walking escorted away by police with her hands crossed behind her back, as if she were in handcuffs, but she was not. At one point she uncrossed her hands and raised her fists to the other protesters.

.@AOC has just been escorted by police away from the Supreme Court. pic.twitter.com/F9DOoLq8yJ

Abortion, Personhood, and the Beginning of Life