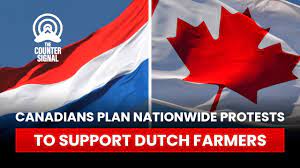 Most (if not all) protests are being organized by Freedom Fighters Canada, who are using the hashtag #WeMoveAsOne to tweet out updates on the new farmer convoy.

As for a brief list of just some of the cities that will see demonstrations, organizers have said they plan to drive through Ottawa, Toronto, Vaughan, Edmonton, Calgary, Grande Prairie, Red Deer, Lloydminister, Montreal, Winnipeg, and Vancouver, making this truly a nationwide demonstration.

Moreover, farmers and truckers plan to do slow-rolls from city to city, expanding the scope further.

For instance, according to a tweet sent out by Live From The Shed, which covered the Freedom Convoy protests, just the slow-roll in the GTA will pass through Bowmanville, Oshawa, Ajax, Uxbridge, Barrie, Innisfil, Newmarket, Orangeville, Cambridge, Milton, Hamilton, Burlington, Oakville, Mississauga, and Toronto before the farmers converge at Vaughan Mills.

This Saturday July 23rd convoy groups from across Ontario are uniting to support the Dutch Farmers and the international fight for freedom. #wemoveasone #farmersprotest #freedomconvoy pic.twitter.com/bYy3NtslfI